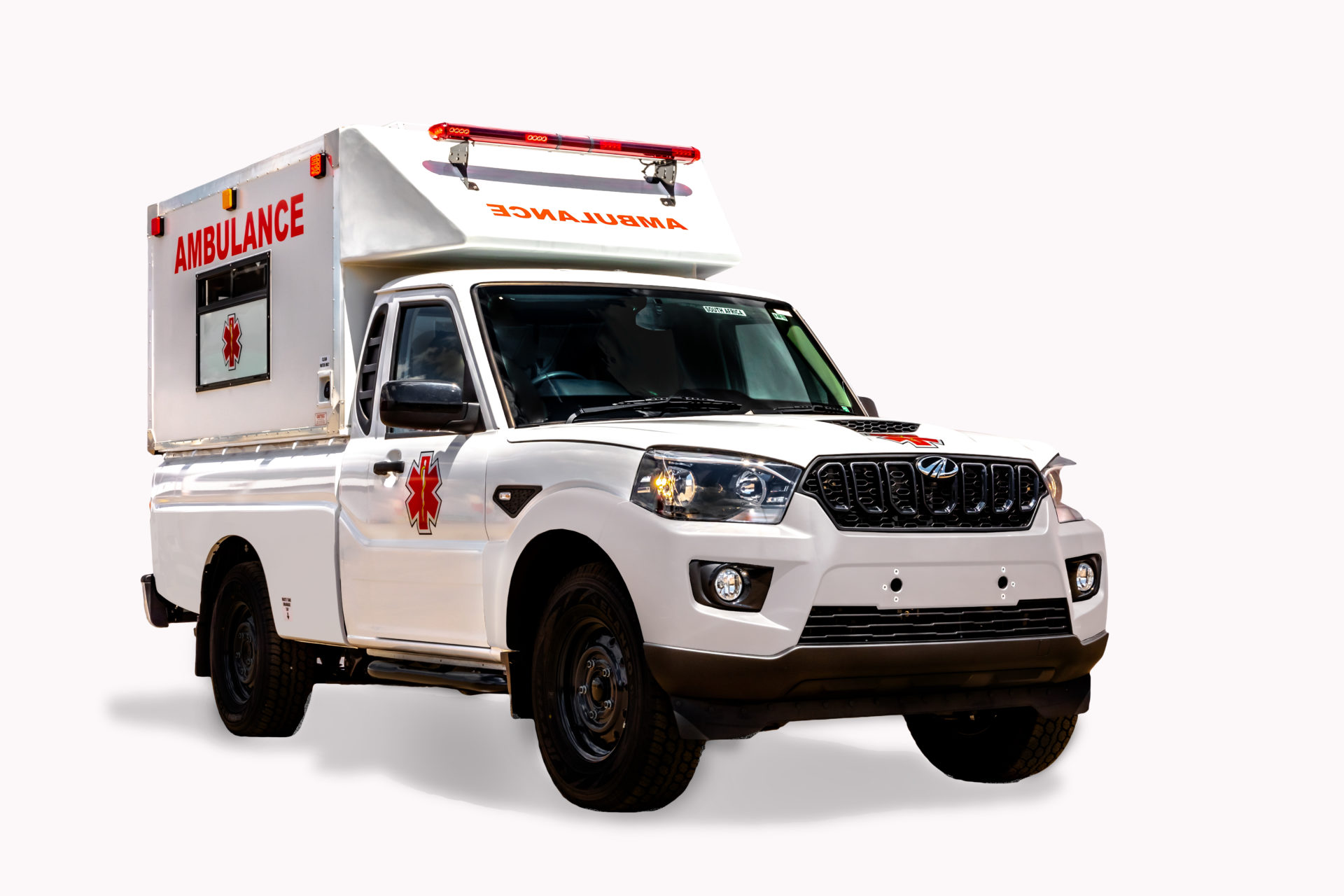 September 23, 2021, Centurion. Mahindra has combined the expertise of its engineers, its technical partners, its assembly facility in Durban and its Gauteng-based Special Fitment Centre to launch an all-new Pik Up Ambulance.

Based on the Mahindra Pik Up S6 Single Cab Chassis Cab, the new Pik Up Ambulance offers go-anywhere medical mobility for first responders and medical staff, especially in rural areas and to reach crisis sites through off road or through rubble and debris.

The new Pik Up Ambulance is converted with a double-walled and insulated ambulance cabin. These proven underpinnings and the support from Mahindra engineers mean that the model carries a full factory warranty and is available as either an S6 Single Cab 4×2 or S6 Single Cab 4×4.

“The Mahindra Pik Up has proven itself as capable, supremely reliable yet affordable to purchase and maintain. It has become a trusted partner to the public and private sectors which often have fleets of Pik Up models on site.

“This widespread acceptance by businesses and the government has inspired us to investigate other applications, such as the Ambulance, which will allow companies to easily add the vehicle to their existing fleet,” says Rajesh Gupta, CEO of Mahindra South Africa.

While there are significant customisation options, the Pik Up Ambulance was created with feedback from medical professionals to ensure that it fits the broadest range of applications from the onset. The range of custom options are available directly from Mahindra and are also covered by comprehensive warranty support.

These requirements include an access ramp to enable the smooth transition of the patient from curb to cabin, with the roll and cot stretcher included in the package specifications. There is an additional spine board that is flush fitting and secured to the side.

The canopy itself is double-walled and insulated, with frosted laminated side windows and one-way windows in the rear. The floor is shock-proof and has been treated with a hard-wearing anti-skid coating.

Inside the ambulance cabin, Mahindra has fitted a range of medically approved equipment that is not only easy to reach and use but allows most customers to buy and use the ambulance without requiring additional customisation and certification.

The range of equipment includes an air conditioner linked to that of the driver cabin, a fresh water system with basin, oxygen tanks, an intercom, interior LED-lighting, a swivel rear spotlight and storage space that double up as a bench. This equipment, and the additional power points in the rear cabin, are powered from an additional battery system fitted in the engine bay.

Each Pik Up Ambulance also has a public address system with siren, a regulation set of red and orange emergency vehicle lights and a range of decals for each province and application.

“By funding the testing, development and certification costs at the start of this project, we have made it much easier and more affordable for companies and the public sector to purchase a hard-wearing, off-road-ready ambulance,” says Rajesh.

The Pik Up with Ambulance Specification builds on the already-impressive safety credentials of the standard Pik Up, meaning that no additional changes were required here. Every Pik Up model offers dual front airbags, ABS brakes with EBD, side-impact protection, and seatbelt reminders as standard.

Also standard, is the Pik Up’s impressive performance and durability. Each Pik Up model is fitted with Mahindra’s tried and tested mHawk turbodiesel engine with common-rail direct injection. This engine delivers 103 kW and 320 Nm.

The S6 also includes luxuries such as cruise control and air conditioning fitted as standard, a ground clearance of 210 mm, with an approach angle of 34 degrees, a departure angle of 15 degrees and a breakover-angle of 18 degrees. The bakkie is certified to tow a braked trailer of up to 2 500 kg and it has a combined fuel consumption of only 7.7 litres per 100 km.

The Mahindra Pik Up Ambulance joins the recently launched Pik Up Game Viewer and the Mining Specification Pik Up double cab in Mahindra’s growing portfolio of locally developed and built special Pik Up models.

The Mahindra Pik Up Ambulance is available at the following prices:

Even more value from the Value Champion