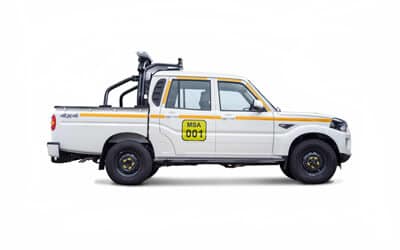 October 20 2020; Pretoria: The tough and reliable Mahindra Pik Up is donning its mining boots with its new factory-fitted and guaranteed mining spec option.

The new Pik Up with Mining Specification package is available on the recently upgraded S6 manual double cab with 4×4 drivetrain and Mahindra’s patented MLD rear locking differential as standard.

The Mining Specification was designed by Mahindra in South Africa to meet the strict safety and signage regulations of open cast mining and large-scale construction operations. The local development was done by the team at Mahindra’s head office in Pretoria and supported by their Special Fitment Centre near Kempton Park and their assembly facility in Durban.

As such, the Mining Specification Pik Up is fitted with heavy-duty external roll-over protection, the necessary red, white and yellow decals, a roof-mounted light bar and a reverse buzzer.

“The Mahindra Pik Up is a well-established bakkie range in Southern Africa, and we are seeing its combination of durability, reliability, affordability and high specification find favour with lifestyle buyers and businesses.

“This is especially true over the last three years, where it has become one of the fastest-growing bakkie brands in the country,” says Rajesh Gupta, CEO of Mahindra South Africa.

By developing and fitting the regulated equipment directly, Mahindra not only saves the fleet buyers’ time, but ensures that the fitment is perfect for the local environment. It also means that Mahindra can provide a full warranty on workmanship and equipment.

The Pik Up with Mining Specification builds on the already-impressive safety credentials of the standard Pik Up, meaning that no additional changes were required here. Every Pik Up Double Cab model offers dual front airbags, ABS brakes with EBD, side-impact protection and seatbelt reminders as standard.

Also standard is the Pik Up’s impressive performance and durability. Each Pik Up model is fitted with Mahindra’s tried and tested mHawk turbodiesel engine with common-rail direct injection. This engine delivers 103 kW and 320 Nm.

The Pik Up has a ground clearance of 210 mm, with an approach angle of 34 degrees a departure angle of 15 degrees and a breakover-angle of 18 degrees. The bakkie is certified to tow a braked trailer of up to 2 500 kg and it has a combined fuel consumption of only 7.7 litres per 100 km.

“By designing and fitting the Mining Specification kit at our Special Fitment Centre in Gauteng, we are able to fit all the necessary equipment, without limiting the mechanical warranty or changing the vehicle benefits, such as the high ground clearance and towing capacity,” says Rajesh.

The Pik Up with Mining Specification is available immediately from Mahindra South Africa and its 67 dealers across Southern Africa.