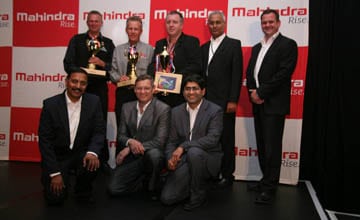 The company’s results for the fiscal year ending in March 2016 show a growth of
4 percent, despite a motor industry decline of 6,7 percent. The results are a clear indication of the Mahindra brand’s strength in the SA market, and the growing demand for vehicles incorporating a strong value proposition.

The company’s positive results coincide with another significant milestone for Mahindra SA: the company’s vehicle sales surpassed the 30 000 mark since it commenced business locally in 2004.

These achievements set the tone when Mahindra SA recently rewarded its business partners for their sales and after-sales performances, while announcing exciting dealership expansion plans — all aimed at further increasing the brand’s share of the South African vehicle market.

The company also used the opportunity to showcase several new Mahindra products, including the recently unveiled KUV100 compact SUV, which has already received positive reports from the motoring media.

Achieving 30 000 unit sales is considered an historic achievement by Mahindra SA, and proves the company’s ever-deepening commitment to the SA market, while underscoring the brand’s growing customer base in a market that’s more competitive than ever.

“It’s a proud day for Mahindra SA in particular, and for the Mahindra brand in general,” says Sanjoy Gupta, CEO of Mahindra SA.

“When we first commenced business in SA some 12 years ago, this milestone seemed a very long way off. Reaching 30 000 sales isn’t just the sweet reward for the hard work of the entire Mahindra SA, but also a vindication of our parent company’s confidence and belief in SA, and the African continent.”

Gupta added that the company’s success was further emphasised by the its ongoing growth, despite the negative sales trend in the industry. “Against the backdrop of the industry’s 6,7 percent decline, the growth of 4 percent achieved by Mahindra is significant. It not only emphasises the growing demand for value-for-money vehicles, but also the growing trust of SA vehicle buyers in the Mahindra brand.”

A fully fledged subsidiary of Mahindra & Mahindra in India, Mahindra SA’s beginnings were modest, but the company’s growth has been exponential. Today, the Mahindra product line-up consists of nine model ranges spanning a variety of sectors – from workhorse pick-ups to luxury SUVs.

“Our products have delivered on their promise of exceptional value for money and reliability over the past 12 years, and we continue to grow our extremely loyal and enthusiastic customer base,” Gupta commented.

“However, we could not have achieved that growth without the commitment of our dealer network, whose enthusiasm and service-driven approach has played a vital role in establishing the Mahindra brand and its products locally.”

The company recently rewarded its top dealers at a glittering gala event, during which Mahindra SA’s top performing dealers in three categories – large, medium and small dealerships – were announced. For the sales awards, dealers were judged on their ability to reach and exceed their sales targets, and their market share in their relative license district.

In the category for small dealers, Mahindra Bethal took the gold award, followed by Mahindra Heidelberg’s silver, while the bronze award went to Mahindra Tzaneen.

The all-important after-sales awards were also announced at the same function. Top after-sales dealership in the small dealership category was Mahindra Heidelberg, followed by Mahindra Brits and Mahindra Tzaneen on silver and bronze respectively.

“The ongoing increase in demand for Mahindra vehicles has allowed us to expand our dealer network, thereby improving both the availability of our products, and our ability to deliver after-sales service and support nationally,” Gupta points out.

The Mahindra network currently comprises more than 60 dealers offering sales, service and spare parts across all nine SA provinces, as well as the SADC region, which ensures increasingly convenient access to sales and service support. The brand has also expanded its reach to include other sub-Saharan countries.

Mahindra SA benefits from the comprehensive resources of its parent company, a multinational corporation represented in more than 100 countries around the world, with a workforce in excess of 200 000 people.

With a reputation as a forward-thinking company that empowers people, the Mahindra Group operates along the principles of three key brand pillars: accepting no limits, thinking alternative and driving positive change.

The brand pillars have been closely adopted by Mahindra SA, which has worked relentlessly to offer SA consumers with value-added transport solutions, linked to a close focus on customer service.

“We are confident that this milestone is further proof of Mahindra’s growing acceptance by a notoriously critical SA motoring audience. As our footprint grows, and our model offering expands, we are convinced that Mahindra’s sales in SA and Southern Africa will continue to increase,” Gupta concluded.